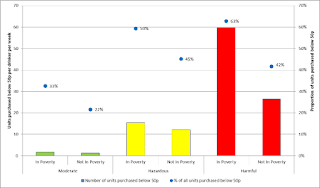 *This is a link to an excellent post by Phil Mellows.  I’m linking not because I’m critical; I completely agree that we need to look upstream to the root causes of alcohol problems (that’s exactly what I’m trying to say in the bullet points above).  But I want to make it clear that we can have MUP for population-wide reasons, for example, without seeing it as a trade-off against treatment for dependent drinkers.
Posted by Will Haydock at 15:29