The Eighteenth Brumaire of Generation Sensible

This morning I was doing the lecture I do once a year to keep my position as a ‘visiting fellow’ at Bournemouth University.  This year, I had to tweak it a bit as the unit has changed, but basically I’m trying to get the students to think about resistance and controversy in culture by taking the concept of the carnivalesque and applying it to their own lives, as I worry that there can be a tendency in anthropology and criminology to point to other cultures or people and see controversy, conflict or disruption as something that happens ‘over there’, perpetuating ‘othering’ and discrimination.

This year, I was emphasising how ‘binge’ drinking has been seen as a development of ‘rave’ or ‘club’ culture.  That producers and retailers of alcohol got worried that a whole generation were foregoing their offer in favour of other places and drugs.  Rather than pubs, people were using fields and warehouses, or at best clubs – and when they went to these places they were more likely to use MDMA than alcohol.

So, according to people like Fiona Measham, Kevin Brain or Howard Parker, the alcohol industry shifted tack to sell alcohol as intoxicating (as opposed to classic masculine ideas of being able to ‘hold’ your drink), and this fed into the specific products and imagery, as well as wider elements such as the design of venues.  Drinks weren’t marketed as brewed or fermented or natural, so much as efficient, easy-to-drink, brightly-coloured products.  Pubs and beer were seen as extension of local community and the everyday, with their local connections and designs echoing the Victorian home.  Post-industrial clubs and alcopops were something quite different.

To the great mass of manual workers the local public house spelled paradise … they held an attraction with which nothing in present-day society can quite compare. After the squalor from which so many men came there dwelt within a tavern all one could crave for – warmth, bright lights, music, song, comradeship, the smiling condescension of a landlady, large and bosomy, for ever sexually unattainable, true, but one could dream. (Roberts, 1990, The Classic Slum, p.120)

A second reason for the popularity of clubs over pubs is that the latter are continuous with their locality and tend to use the cosy decorative rhetoric of the home (often the Victorian home). Clubs, however, offer otherworldly environments in which to escape; they act as interior havens with such presence that the dancers forget the local time and place. (Sarah Thornton, Club Cultures, p.21)

And the argument runs that we (specifically people like me who reached legal drinking age in the 1990s or early 2000s) swallowed all this – hence alcohol consumption bounced back from that late-1980s slump, and rose right through from 1995 through to 2004. 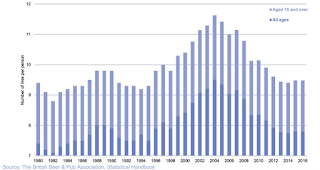 Taken from Institute of Alcohol Studies https://www.ias.org.uk/uploads/pdf/Factsheets/FS%20consumption%20022018.pdf
Since then, we’ve supposedly had ‘generation sensible’, who have eschewed alcohol and other drugs while working hard through school and university, put off alcohol by their heavy-drinking parents and worried into conformity by the bleak job market and lack of financial security.

Some interpretations of this post-war history remind me of Marx’s Eighteenth Brumaire of Louis Napoleon: ‘first as tragedy, then as farce’.

The ‘real’ sub-cultures like mods, rockers and punks, were ‘tragic’ as along came Thatcherism.

But the ‘farce’ is the way that a genuinely resistant club/rave culture was clamped down on and co-opted by big business and government to become the ‘binge’ drinking that revived the ‘night-time high street’ in the 1990s, endorsed by the New Labour government’s optimistic aspiration to create Bologna in Birmingham and Madrid in Manchester.

There’s no real ‘resistance’ in getting drunk on a beer brewer by a multi-national, in one of a chain of clubs owned by a multi-millionaire.  And you’re not even creating some potentially powerful form of solidarity while doing it.

Some of these commentators even think that people my age don’t know what real friendship is.

[F]or most, traditional friendship seems to have been largely displaced by superficial, temporary and fragile alliances based on competence in the competitive display of consumer-lifestyle symbols (Winlow & Hall, Violent Night, p.91)

This is why the concept of the ‘carnivalesque’ was so interesting to me.  Carnival, as Terry Eagleton said, has always been a ‘licensed’ event.  The church provided the ale, and the state permitted the ‘time out of time’ in the hope that it would allow some steam to be blown off and people could tolerate work and social structures a bit longer.

When we look at British drinking in that longer context, it’s not clear how ‘binge’ drinking was particularly conservative or disappointing.  The politics looks a lot like more of the same to me.  In his description of the archetypal pub, Robert Roberts doesn’t just talk about the ‘bosomy’ landlady, but also ‘her husband … a man of the world dispensing wit and wisdom – and Tory politics too, of course: publicans were Tories almost to a man, and the party’s self-appointed agents’.  And indeed the brewers genuinely were often their political representatives – think of Robert Cain in Liverpool.

So if these were the ‘good old days’, they certainly left plenty to be desired – particularly for women, or those who didn’t fit the standard (white) model of masculinity.  (There’s plenty still to be desired today.)

But what about the promise of postwar sub-cultures?  Well, punks ended up selling butter and having to apologise for racist and misogynist abuse.  Maybe all that ‘resistance’ wasn’t as revolutionary as some might have hoped.

So perhaps we need to look again at ‘generation sensible’.  When discussing potentially resistant spaces or practices in the seminar this morning, I wondered if part of being ‘sensible’ is to be more straightforward and literal.  Hairstyles aren’t particularly resistant, but the sub-culture, the youth culture, the resistance of today is to be found in more directly political practices: protest in person and discussion online, particularly through social media, directly challenging certain views.  Those were the occasions the young people I was speaking to this morning said they’d experienced something ‘carnivalesque’: free and familiar contact between people; the opportunity to challenge established structures or authority; the feeling that those in power IRL maybe can be challenged.

Of course it’s not a new idea that the internet offers a potentially resistant space (though Cambridge Analytica and the like have meant it’s taken quite a battering in recent years).  But I think it’s worth us looking again at youth culture and taking off our rose-tinted spectacles.  It all feels like it’s got a bit personal.

Winlow and Hall challenged us in 2006 not to think that ‘"the kids are alright", that they are free-willed, resistant and innovative’ (p.194).  That was presumably my generation they were talking about (Who pun again intended), given that I was 22 when the book was published.  The book reads like a lament for industrial, working-class masculinity and its supposedly classic haunts such as the pub.

And in more recent years it’s felt a little like some people who came of age around the time of 'peak booze' have been, to quote another song, asking ‘generation sensible’: if you don’t smoke and don’t drink, what do you do?

But maybe this time we won’t have either tragedy or farce, and instead something approaching sensible progress.

Posted by Will Haydock at 19:12 No comments: