The Daily Mail recently posted the headline: “Number of women drinkers treated in hospital for liver failure soars with teenage girls being treated for life-threatening condition”.  The article includes a statement from Andrew Langford of the Liver Trust, suggesting that that liver disease in the UK is ‘spiralling out of control’.  This is just the sort of claim that gets me interested, and it turns out to be an ideal topic to be discussed on this blog, if I’m to stick to my original intention of trying to bring clarity to debate.

So first to the Mail’s claim on the numbers of women being treated for liver failure.  I don’t actually know exactly where the stats come from that the Mail quotes, but they provide them and comment on them, so I’ll just do the same.

The claim is that they have ‘soared’ in recent years.  As you can see from the graph below, they’ve increased, and at a steady rate – it doesn’t look to me like they’re ‘soaring’.  In fact, it works out at a 3% rise each year, which isn’t so dramatic.  When adjusted (very crudely*) for population growth, this figure drops to around a 2% annual increase.  Still noticeable, but I’d be even less likely to see this as ‘soaring’. 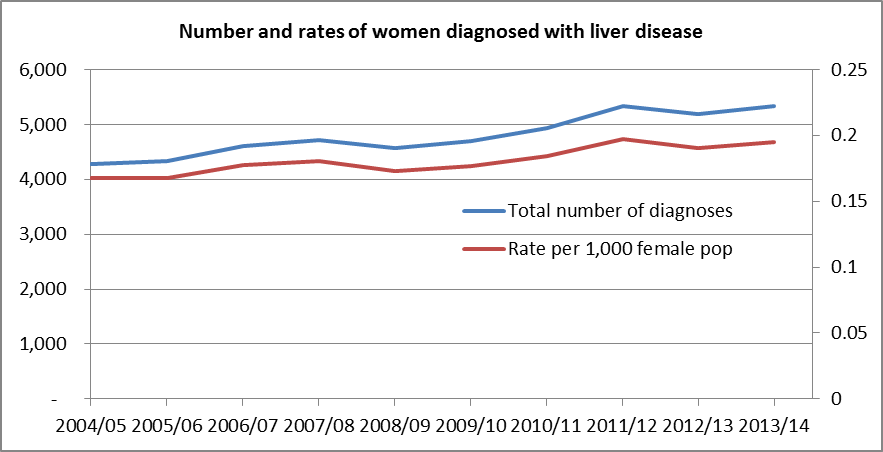 But, as we’ll see again in a second, looking at a single year – or in this case comparing just two – can be a little misleading.  If we look at all the data the Mail gives, we can see that it’s 2004/05 that looks like an anomaly, and since then the numbers have stayed pretty much constant.  When you look at the blue line it’s hard to see any real pattern over the years; it just seems to be dodging either side of the average. 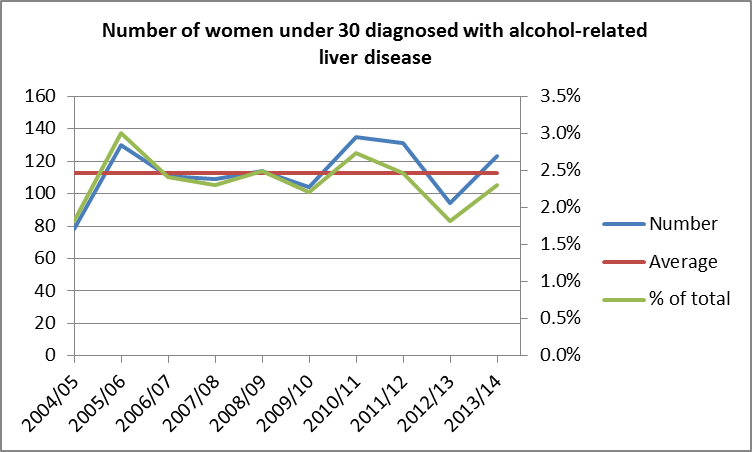 And the green line gives some indication of whether the emphasis on young women is fair.  My judgement would be it isn’t really.  Despite last year’s uptick, the green line is generally falling – which tells us that if we’re concerned about liver disease amongst women, the younger age group is becoming less relevant, as it accounts for a smaller proportion of those cases.

There are variations in population over the period that could muddy this picture (the changes are a bit too complicated for me to take into account in a quick blog post) but the number of 15-30 year-old women has gone up and then down again over the 9 years so it’s not going to make a crucial difference.  (Just as an aside, I always find looking at the population pyramid fascinating, with the ever-repeating echo of the baby boom.) 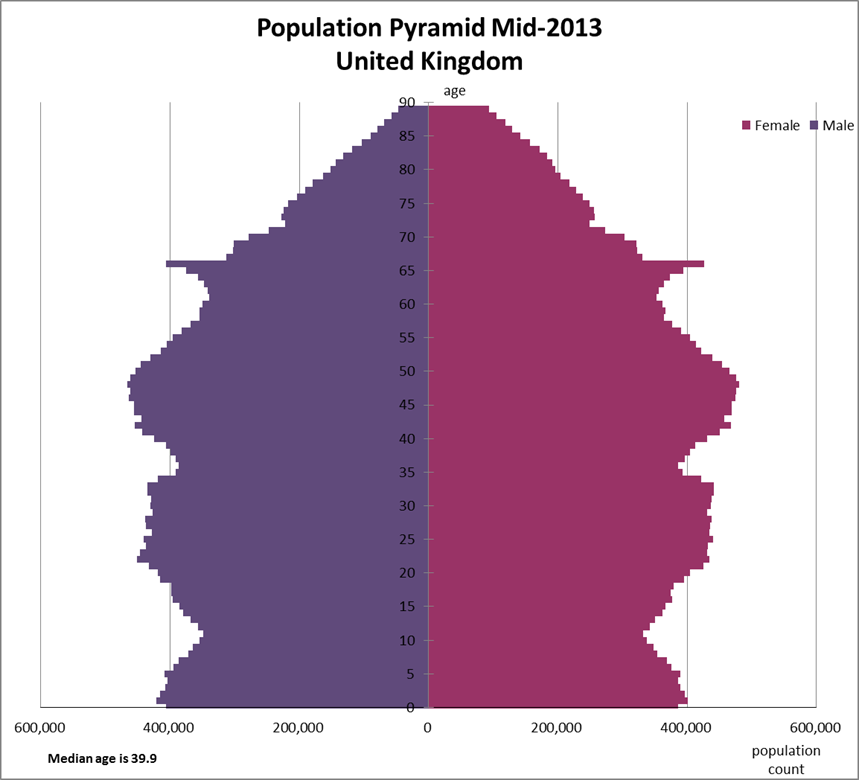 So I’d struggle to identify a crisis with liver disease amongst women – and certainly amongst younger women.  Remember that the figure the Mail gives is 123 diagnoses for women under 30.  That’s under one person per local authority in the country.  Out of the thousands of young women in your local area, there probably isn’t even one who was diagnosed with liver disease last year.

Also, it’s worth noting that by focusing on women, the article is assuming there’s more of a problem for them than men.

Unfortunately I can’t easily get time series data that’s also divided by gender for liver disease hospital admissions, but I can get the death figures – which in some ways could be more powerful.  These stats show quite strikingly how men still dominate the figures, and also how the number of deaths amongst men or women from alcohol-related liver disease hasn’t really changed much since 2007, apart from a blip in 2011.  And that’s not even taking into account the growth in population, which would suggest the rate of liver disease deaths due to alcohol might actually have fallen in that period. 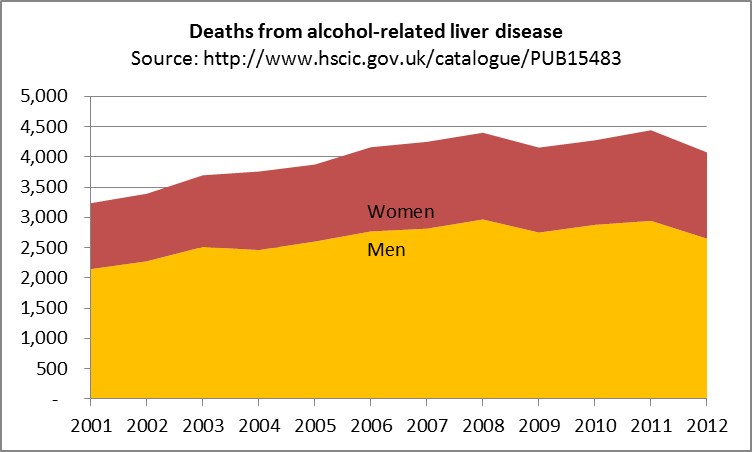 And it’s these death figures that are behind the Liver Trust claim that we’re seeing liver disease ‘spiral out control’ in this country.  As we’ve seen, there are rising rates of diagnosis.  My rough and ready calculations suggest that admissions have risen by about a third in the past decade, averaging 4% growth a year (not adjusting for population). 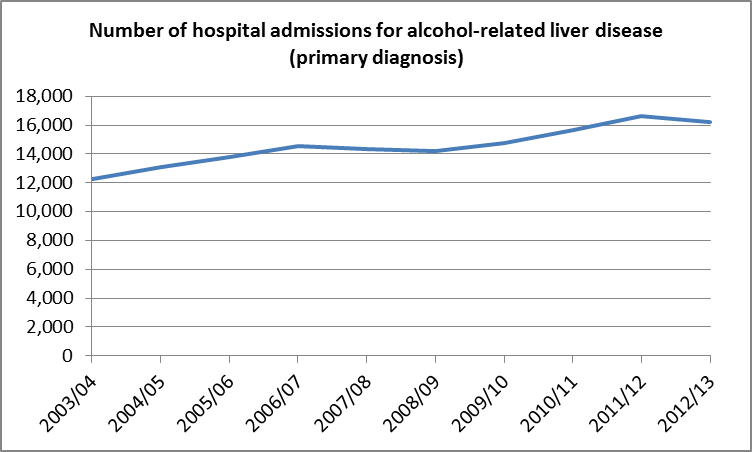 I’m still not sure that constitutes them ‘spiralling out of control’.  The key graph for this claim, as far as I can tell, is probably this one – which quite rightly gets shown a lot by concerned public health professionals (taken here from the Liver Trust’s own website): 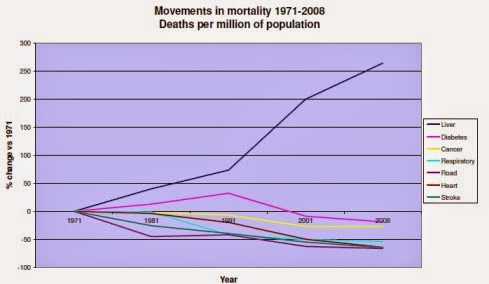 It is indeed a shocking graph, and shows that liver disease is a serious and unusual issue for mortality rates.  The point about a spiral in this context is that it conveys things are getting higher and higher – over time.  And certainly the graph shows that.  The liver disease line rises and rises.

We can take the death figures since 2001 from the chart before, but standardise them to 2001 to continue the methodology of the Liver Trust chart. 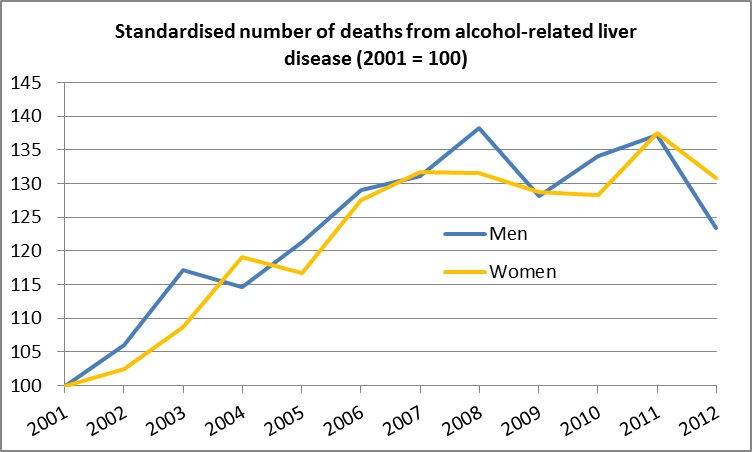 Looking at the data like that, it’s suddenly clear that 2008 is an interesting year to pick as an ‘end point’ of a graph on liver disease deaths.  It’s the highest we’ve had in this country.  But we’re actually seeing at worst a static number of deaths from this cause (again, while we have an increasing population) and at best the numbers are actually declining. 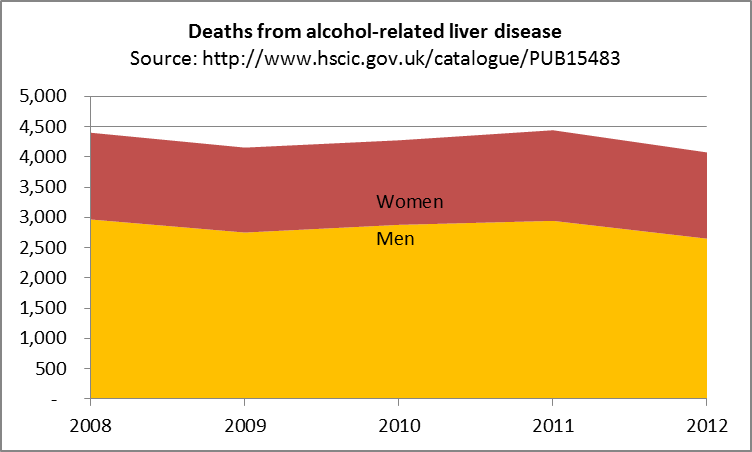 All this doesn’t mean that I don’t think liver disease is a serious problem – and the rates we’re seeing are way beyond the immediate postwar period.  But there are lots of reasons for that, and we need to have a sensible debate about how best to address that.  I’m not convinced that alarmist rhetoric about rates ‘spiralling’ when they might at most be rising pretty steadily helps this debate.  But then I’m not having to play the political game of winning attention (and therefore funding) for my chosen issue.  I left that behind a few years ago.

*Methodological note:
Apart from the Daily Mail stats, all the liver disease figures I’ve quoted are from the 2014 ‘Statistics on Alcohol’ publication, which is here: http://www.hscic.gov.uk/catalogue/PUB15483 The time series data can be found in the csv zip file.

The population stats are taken from mid-year estimates, and are available here: http://www.ons.gov.uk/ons/rel/pop-estimate/population-estimates-for-uk--england-and-wales--scotland-and-northern-ireland/2013/index.html

If you’ve got any questions, just get in touch, but I think I’ve been clear and fair in what I’ve done.
Posted by Will Haydock at 01:45 No comments: