Writing a drug strategy is just like choosing a suit

Over the past week or so, I’ve obviously read a lot about the new drug strategy.  Mostly short comments on Twitter, sometimes pulled into threads.  I’d also recommend reading the evaluation of the previous strategy and, if you’re interested in treatment specifically, the new Orange Book guidelines.  Or at the very least, Andrew Brown’s excellent summaries of them here and here!

(If you want a summary of my response, see this thread.  This blog post will try to make some bigger, broader points about policymaking and politics.)

My abiding impression is of a lot of sensible words, but without power or resources to back them up, I can’t see how anything will change.  This is a strategy that, in an environment of at least 20% cuts – and almost certainly more once the ringfence for public health comes off in the next couple of years – promises that quality and outcomes will improve, and a wider range of people will receive more tailored treatment.  I just can’t believe that. 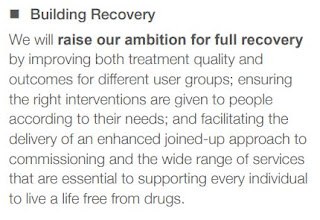 I don’t want this post to simply be a rant against austerity, or an unreflective claim that any reduction in funding must equal a reduction in quality.  In Dorset we’ve been open in acknowledging that we can deliver treatment more efficiently and effectively than we have in the past by taking on the vision of ‘phased’ and ‘layered’ treatment from the Strang Report, and there is some truth in the idea that tightening resources can focus the mind and force people to work ‘better together’.

But that kind of approach depends on making some hard choices.

There is a certain efficiency in a Fordist approach to public services where everyone gets the same thing.  There will be some sweet spot of efficiency between that Fordist ‘any colour so long as it’s black’ approach and fully individualised, tailored services.  As usual, I’m going to suggest that compromise is a good solution.  Think of suits (as I often do).  For most people, it’s not ‘efficient’ to buy an expensive tailor made suit.  But that doesn’t mean we all have to wear the same suit.  There’s a nice sweet spot of buying ‘off the peg’, but being able to choose a range of sizes and styles from a range of providers.

But what’s the choice between Marks and Spencer and Moss Bros got to do with drug treatment?

Well, the point is that there should be some ‘tailoring’ of treatment, but within certain limits.  And certain styles or sizes are cheaper and more easily available than others.  So I might buy a tailored or more expensive suit for a special wedding, but have a few cheaper ones for work.  I would find it laughable if someone suggested that I should buy enough tailored suits to see me through the working week – unless of course they were about to massively increase my pay, or force me to reduce my mortgage, or how much I spend on food and drink.  The point is, I’d need to make some trade-offs.

Now, in this increasingly tortuous analogy, we can think of the commissioner as the suit-buyer, and treatment as the set of suits.  And this is when I haven’t even mentioned the ‘chinos’ of brief interventions (not to everyone’s taste, and not the full outfit, but cheaper than a suit) or the t-shirts of needle exchange (a good, cheap, reliable, low-level intervention).  Some interventions or moments are the ‘wedding’ occasion: it’s worth putting in that extra effort because of the reward of getting it right.  For others, it makes more sense just to have a decent, long-lasting M&S work suit.

The point is: someone needs to make this choice, and we can’t have a wedding-standard suit for every day of the week.

But the strategy seems to pretend that we can.  It describes having ‘a targeted approach for high priority groups’ (p.10), and then proceeds to list just about everyone who might have a ‘substance use disorder’ (or whatever you want to call it) or is at risk of one:


I would struggle to think of someone who doesn’t tick one of these boxes.  I suppose it would be a single person in work, living on their own, who is neither young nor old, not using NPS, IPEDs, participating in chemsex or misusing any medicines, not engaged in crime or sex work, and has never been in the armed forces, and still has stable accommodation.

There could be a 35 year-old heroin user who fits the bill, but I think they’d be doing well to have stable accommodation on their own, be in employment, and not engaged in any form of criminal activity.  And in fact, I might even go so far as to suggest that, if they ticked all those boxes, by definition they don’t have a (severe) substance use disorder, because while they might have some form of dependence, it’s harder to see how their life is being affected by their use.

Maybe I’m being facetious, but I want to make a genuine broader point.  Policy discourses are filled with people talking about ‘targeted’ provision, or identifying ‘priority’ groups.  But a ‘target’ by definition means there’s some other place you don’t want to hit.  A priority can only be defined if there’s something you’re not prioritising.  Both locally and nationally, I fear that politicians and policymakers are reluctant to admit this trade-off and make the hard decisions.  But that should be what real leadership is about.

The sad thing is that this isn’t new.  Because I’m a slightly odd person, I’ve recently been spending my free time reading about the ‘new public management’.  The best book on this I’ve found is The Managerial State by John Clarke and Janet Newman.  This was published in 1997, and includes the following two sections that seem sadly resonant today:

Those working in public services are having to manage not just budgets and people in the pursuit of greater efficiency, but the tensions and dilemmas of rapid and unpredictable change.  The results are frequently high levels of stress and overload which tend to spill over into ‘personal’ life.  At the same time, however, these managers have engaged with the challenge of building more responsive, flexible and user-oriented public services. (p.x)


Dissent from the discourse is difficult to articulate – in the sense of having few pertinent vocabularies through which it can be spoken.  This does not mean it is absent.  On the contrary, it is clear that there continues to be a variety of sources and forms of dissent, ranging from defensive conservatism to marginalised radicalism both within and beyond the state.  But the scope of the discourse of change has meant that much of this exists in the form of passive dissent.  Familiar examples are the patterns of scepticism or cynicism that are a recurrent response to the inspirational language of organisational transformation.  This treats the discourse of change as ‘empty rhetoric’ – a dazzling imagery that conceals a grim reality of declining services, shrinking resources, and gung-ho managers following the latest big idea while the front line struggles on. (p.54)

I’m afraid that, in light of this strategy, the last sentence of this paragraph rings even more true to me.  I’m not optimistic we’ll see any change in favour of more realistic discussions and debates any
Posted by Will Haydock at 09:45 3 comments: