Ambitious for an informed debate

It’s hard to convey quite how frustrated I was by Sunday’s Centre for Social Justice report on alcohol and drug treatment – and quite how much of a gift for this blog it is.  I won’t really do it justice in this post, as there’s so many gaping holes and misleading inaccuracies in it that I can’t begin to address them all here.

It’s worth mentioning in passing, though, that the much-trumpeted idea of ringfencing an allocation of alcohol tax for rehab could be counterproductive.  The likelihood is that this would come to be seen as the funding for alcohol treatment, meaning that current allocations might be dropped – certainly by local authorities keen to raid public health budgets to ease the pressures of the graph of doom.

There are two key issues I want to focus on here, based on the prominence given to them by the press release and CSJ reps in their media appearances.

First, that residential rehabilitation is the only way to achieve ‘full recovery’.  This sort of argument hinges on one’s preferred definition of recovery, and the adoption of this buzzword in the 2010 Drug Strategy and subsequent Strang Report just papered over the cracks within the sector: the ‘methadone wars’ are far from over.  As DJ Mac suggested, the way the report is written is hardly conducive to the dialogue and persuasion that would be required to genuinely transform drug treatment successfully.

Almost more fundamentally, though, the report presents a conclusion without any basis in evidence.  The only reference for the effectiveness of res rehab is the 2012 NTA report The role of residential rehab in an integrated treatment system, but this largely endorsed the position of most local authorities in using res rehab for a minority of individuals.  It even stated: “For every ten people who go to rehab each year, three successfully overcome their dependency, one drops out, and six go on to further structured support in the community.  Of those six, two overcome dependency with the help of a community provider, at least two are still in the system, and at least one drops out.”  That is, res rehab is not some magic, universal solution, and in fact often treats those who are more stable to begin with – the most challenging and chaotic are those who drop out, and it’s community treatment services that are left to manage them.  Rehabs, the NTA report said, are better at treating those with alcohol dependency than drug addiction – but then this is true for community services too.

There is no doubt that even a six month stay in a res rehab, if successful, is a better option than 10 years on methadone in the community, but it’s not immediately clear that this is a direct choice funders, commissioners or service users can make.  As DJ Mac argued, we do need a debate about how drug and alcohol treatment services should be organised, but it needs to be constructive.  It’s not just that the press release was confrontational; I heard Chip Somers promoting the report on Radio 5 (43 mins into the link) claiming that it’s basically impossible to get state-funded rehab at present and there are waits of years.  I just don’t know where this is true.  There is something of a ‘postcode lottery’ in the sense that policies will be locally-determined, but many facilities would count up to half of their clients as state-funded, and not all local allocations for res rehab even end up being spent.  This is just not as simple as there being a local (or national) policy block on accessing such services – and that’s if we even accept the effectiveness of such services in the absence of clear evidence.

Second, the report makes some big claims about drug-related deaths, which were picked up on by the media.  The first thing to note in this respect is the big picture: whether we’re looking at general drug poisonings or the subcategory of ‘drug misuse’ deaths, it’s very hard to argue that we’re seeing anything approaching a crisis: 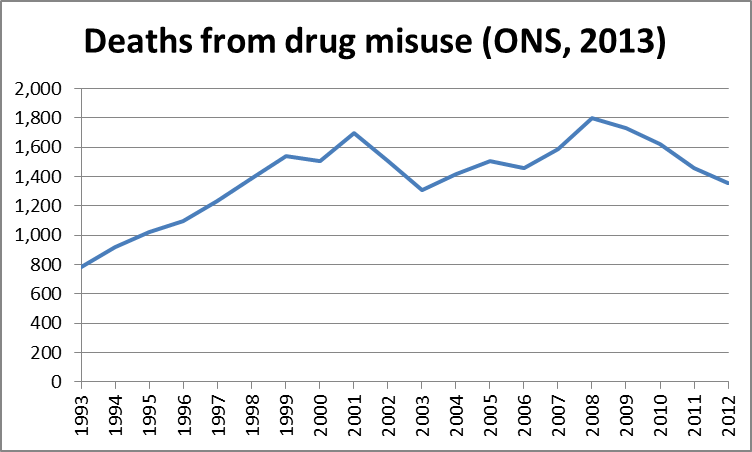 (I should point out that this second graph is from the 2013 St George’s report on drug-related deaths,  because this is what’s cited by the CSJ in theirs, and that’s what I’m working from throughout the rest of this post.)

More than this, however, the analysis given is just cherry-picking to illustrate a point.  Last year, the CSJ was concerned about the growing number of deaths involving methadone – and this surely still underpins their opposition to opiate substitution treatment, expressed in the latest report.  What they’re concerned to do in the report is paint drug use as a continuing major problem despite declining use of heroin.

NPS (new psychoactive substances) are the particular choice for this report.  If you were cynical (unlike me) it might occur that this is a useful focus, because it’s so difficult to predict how use of and harms from these substances will develop in the coming years, making panic-inducing speculation possible.

Certainly, deaths related to NPS have increased, and the CSJ focuses on this, hence all those headlines about NPS deaths being about to overtake heroin.  The thing is that their analysis doesn’t improve our understanding of the situation regarding substance use in England today.  In fact, it could be argued that it is actively misleading.  NPS deaths are compared with those from heroin and morphine – but why not opiates as a whole, if methadone-related deaths were such a concern last year?  It might be suggested that pointing out the decline in methadone-related deaths wouldn’t fit with the big narrative based on how terrible methadone is, given that last year’s figures relating to heroin and methadone appear to have been an anomaly. 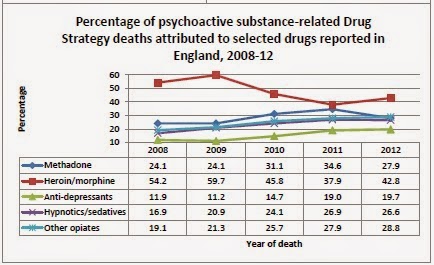 The crucial thing to note here is that the opiates are the single most common psychoactive drug group associated with deaths.  In fact, heroin and morphine deaths accounted for a higher percentage of the total in 2012 than 2011 (by 5.1%). 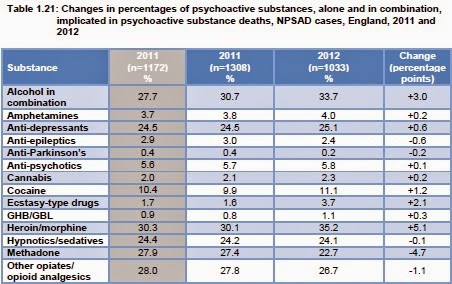 As an aside, I’m talking about drug-related deaths, but it’s worth pointing out that when the CSJ talks about drugs causing deaths, they have a tendency to count the cases where particular drugs were noted in the toxicology report, rather than where a specific substance was listed as a cause of death.

First off, the CSJ uses just four years of data, covering 2009 to 2012, so long-term trends might not be apparent.  More than this, though, for their extrapolations they only look at two years compared, taking the change from 2011 to 2012.  In the timescale of legal highs this is quite a while ago, and just one year in what could be seen as a rapidly changing field.

I say it could be seen as a rapidly changing field, because if the CSJ had conducted the same analysis last year, rather than noting a 43% increase in deaths were the individual had NPS in their system, they would have seen no change at all.  Both 2010 and 2011 saw 68 post-mortem toxicology reports citing NPS.  (An increase could have been argued if ‘cause of death’ were considered as the key variable, however.)

You could say it would be hard to predict next year’s figures based on a line of development like this: 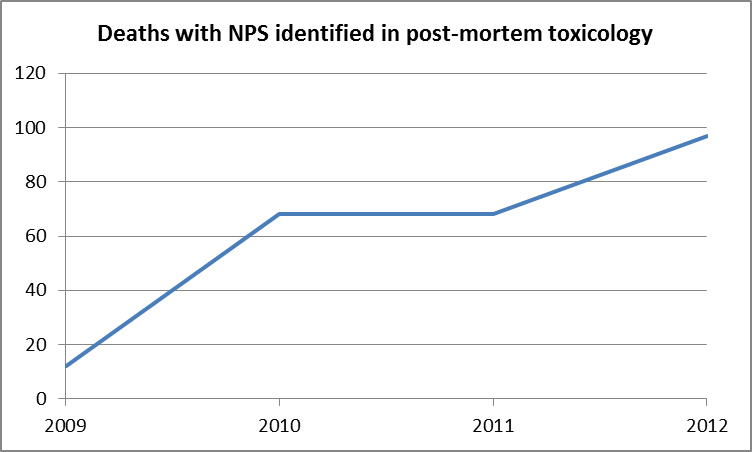 That’s precisely what the CSJ report did though, and what was picked up by the news headlines.  The supposedly newsworthy comparison, as I mentioned above, was with heroin and morphine deaths.  Initially, it’s hard to see how the NPS deaths would outstrip the others: 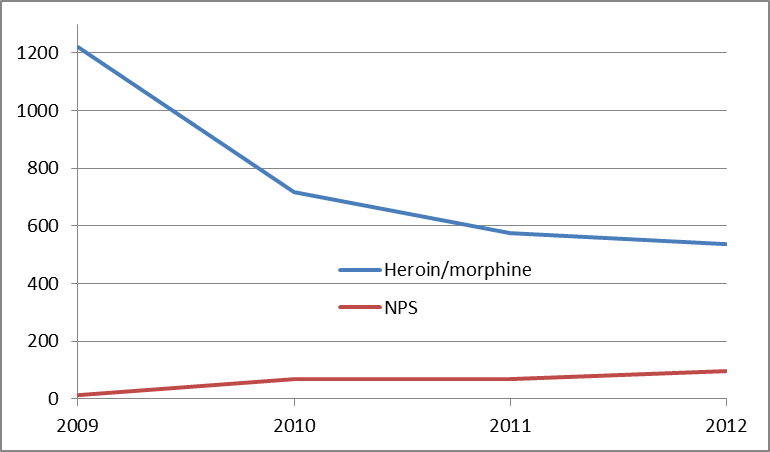 However, the extrapolation on one year produces a convergence: 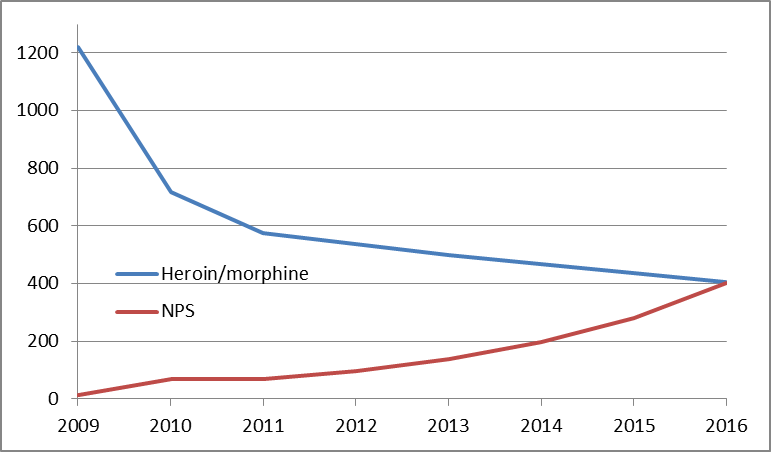 There’s an interesting choice made here: the extrapolation isn’t linear; it’s exponential.  That is, there’s compound interest on the increase, such that if NPS deaths carried on increasing in this way although the figure of 400 seems believable for 2016, it’s hard to imagine 1,166 in 2019 or 1,663 in 2020.  This isn’t to say these figures aren’t possible, but there’s no explanation as to why just one year’s change is taken as opposed to an average over the period, and why this is then compounded rather than treated as a linear function.  The strangest thing about the whole process, though, is that actual figures for 2013 are due out on 3rd September.  We don’t have to predict; we can know.  Why not just wait for a couple more weeks to make the estimates more accurate?

However, there is no doubt that whether we look at the ‘toxicology’ or ‘cause’ figures, there has been a rise in ‘NPS’ deaths in the period.  What isn’t so clear is whether these are due to what most people would think of as ‘legal highs’ – or indeed whether the substances would be covered by the interventions later proposed.

The increase in toxicology figures from 2011 to 2012 (on which that extrapolation is based) wasn’t down to mephedrone, or anything ‘legal’.  In fact, the bulk of the increase was down to PMA.  Toxicology reports citing PMA rose from 5 in 2011 to 19 in 2012.  But PMA isn’t a novel substance, having been available at least by 1970, and a Class A substance in the UK since the Queen’s Silver Jubilee.  It seems to generally be sold as ecstasy, so it’s not even that users understand it to somehow be a ‘legal high’.  That is, these deaths have little or nothing to do with head shops, as far as we can tell – and yet the recommendations of the report relating to ‘legal highs’ focus on head shops.

Another category of drug that rose was benzofurans – from 1 to 9 – and methoxetamine – from 1 to 6.  Both of these are now illegal (though in the case of methoxetamine, only since 2013 – after the period covered by these data).

Given that the concerns expressed regarding ‘legal highs’ are how to police ‘head shops’, and it would be quite straightforward to stop head shops selling any of these substances, I’m not sure how the concerns and proposed solutions fit the identified problem.  Of course, it might be that head shops continue to pose problems, simply with a new set of drugs – but the CSJ report would have to explain why that’s likely to be the case.  It would probably need new data that illustrate how things have developed since the banning of the relevant substances (and indeed how banning makes any difference whatsoever, given the apparent importance of PMA), and should acknowledge that comparing just two years’ data isn’t the most secure basis for an extrapolation.

Both issues – of NPS deaths and residential rehabilitation – highlight my concern about not just the tone of the CSJ report but its basic accuracy.  We do need a constructive debate, and that requires not only open dialogue, but clear, honest discussion of the evidence.  The CSJ report offers neither, which is at best disappointing.  At least it keeps me busy though. 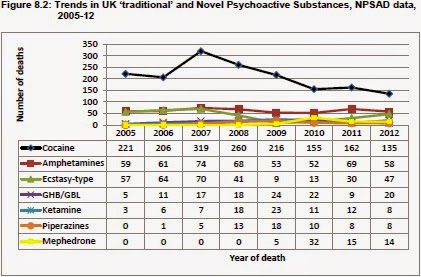