Last week, I was invited onto BBC Radio Solent to talk to Simon Jupp about cannabis scratch and sniff cards – designed to educate the public about the smell of cannabis being cultivated, and therefore make them more likely to spot and report cannabis farms to the police.

Because I have a streak of vanity and egotism, you can listen to the brief excerpt below.  The only positive, really, is that I managed to get in my usual caveat when asked whether the scheme would work: well, of course that depends what you’re trying to achieve…  I tried to point out that, in itself, spotting and reporting an individual house being used to grow cannabis isn’t going to do much to address the key issues that surround illicit drug use in Britain today.

However, this interview isn’t something to boast about – it’s certainly not my finest hour, as I haven’t actually seen and played with one of these cards, and I don’t know how effective they’re likely to be.

Also, the discussion didn’t quite go the way I was expecting.  I had thought, given that this was on the day when Russell Brand and others were demonstrating next to Parliament, that we’d quickly progress onto broader issues of drug control, and so I’d had a bit of a think about that, and noted how many US states have legalised marijuana for medical and/or recreational use.

I’d made some quick, simple notes, therefore, about the arguments about drug regulation/legalisation.  I’ve been thinking about these this week too, having seen an article by Kathy Gyngell on The Conservative Woman blog, and something in The Economist about how decriminalisation should only be seen as a step on the way to the rational policy on drugs: regulated legalisation.

This is my attempt at what I said in a recent post academics should do: not just offering a critique of current policy, but suggesting a constructive alternative.

Of course, in terms of drug policy we can take the sensible position of the Irishman in the old joke: I wouldn’t start from here.  However, as Virginia Berridge points out so powerfully, simply thinking in the abstract doesn’t automatically generate sensible, workable policy.  We do need to start from here.

(At the same time, it’s worth understanding where we are, and this recent paper from the International Drug Policy Consortium highlights how the fact that some ‘drugs’ are legal and some illegal in the UK today is something of a historical accident.)

The crucial starting point is my old issue (and I make no apologies for sounding like a broken record): what are we trying to achieve with drug/alcohol policy?  Kathy Gyngell’s article focuses on individual users, and the risks they might face.

Some of these aren’t as clear-cut as she suggests – for example, the issues with the current criminal market doesn’t simply apply to drug possession offences, and the prison population doesn’t represent all those engaged with the criminal justice system, especially not for drug-related offences, where a Drug Rehabilitation Requirement (DRR) will often be a more appropriate solution.

Moreover, she presents the links between mental health and cannabis use as clear-cut, when they are anything but.  Just last week research was published that suggested both cannabis use and schizophrenia seem to be associated with a particular gene.  That is, the same genetic trait that fosters cannabis use might also predispose a person to have schizophrenia – and this might explain why they’re clustered, rather than a simple one-way linear relationship.

However, these individual arguments aren’t the only issue around there being a criminal market in drugs.  As I say in the interview, there are links with organised crime.  But this isn’t just about the example of trafficking that I managed to give in the interview; it’s also about the general instability of producer nations – as the Economist article notes.

This is in fact, for me, one of the most concerning points most about the current situation – and is likely to be how some of the greatest harm occurs.  However drug markets are controlled or regulated, there are likely to be ‘addicts’ of some kind – people currently benefit from treatment for issues with the legal drugs tobacco and alcohol as well as heroin.  An argument might be made that there are more heavy drinkers than illicit drug users in the UK, but that doesn’t necessarily imply greater health and crime costs.  I’m yet to be convinced that a cost-benefit analysis that looked at the global situation would conclude that greater damage is done by alcohol than drugs, if the way in which the illicit trade destabilises whole nations was taken into account.

One of the odd patterns in current drug policy is how greater regulation of tobacco is occurring at the same time as liberalisation of cannabis.  Admittedly, this is taking a global view, but as US states legalise cannabis – even for recreational consumption – Australia has introduced plain packaging for tobacco, and Britain is seriously considering this.

However, this doesn’t seem to strange if we take the perspective of Transform, an organisation that campaigns for liberal drugs policy.  It argues that there’s a U-shaped curve when harm is modelled against level of regulation. 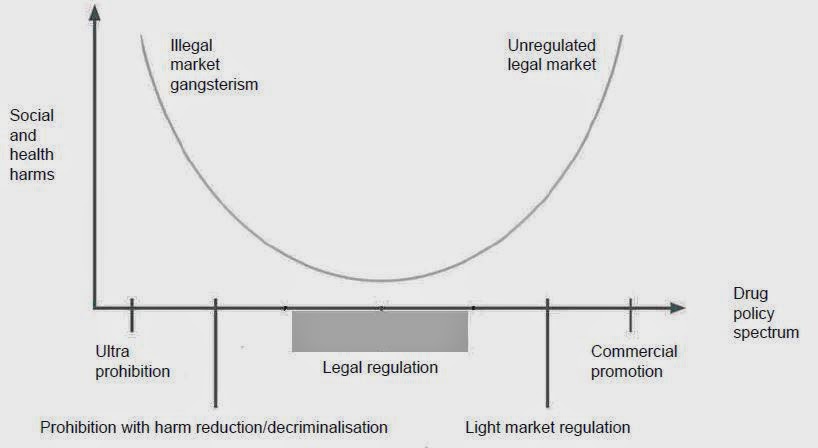 That is, a completely free market in drugs would lead to high levels of harm – but so does attempted complete prohibition.  According to this interpretation, therefore, the most appropriate solution is a strongly regulated but legal market – somewhere in the middle.  Perhaps this approach appeals to me simply because of my tendency to see both sides of an argument, but it’s certainly worth thinking about.

What’s more, the current global trend suggests that this might be the direction we’re heading in anyway: both plain packaging and legalisation of cannabis for recreational use could be argued to sit somewhere in the middle of this graph.

There are arguments about whether highly regulated legality – through the Central Control Board for alcohol, for example – amounts to a middle ground.  Some see them as interfering with the market so much that they’re approaching prohibition.  This isn’t how I see them, however.  For illicit drugs, from the position we’re at currently, there would have to be decriminalisation before we even approached this level of controlled legality.  Licensed consumption locations for products that are quite clearly not ‘ordinary commodities’ seems perfectly sensible, and it’s also perfectly reasonable to imagine that certain conditions might be laid down in how those properties are arranged and run.

This trend isn’t necessarily the result of conscious planning – and my experience of policymaking is that these sorts of trends are more complicated than that.  We might be stumbling towards this policy mix thanks to an accidental ‘synthesis’ resulting from a whole range of groups including public health or tobacco control lobbyists as well as campaigners for drug legalisation.  This is precisely my view of how policy should be made.

So maybe there’s reasons to be cheerful after all, despite the shortcomings of scratch and sniff cards and Kathy Gyngell.
Posted by Will Haydock at 00:51