I want to preface this post with a caveat that I hope implicitly precedes every post here: I consider the reasoning and conclusions a work in progress, and I may be wrong not just in my views or opinions, but in facts or the logic of interpretation.  Please tell me by comments, email or Twitter if you think that’s the case here.

I’ve been prompted to write this week by the print version of a Sheffield article on MUP coming out in the Lancet.  (The article was originally published online in February.)  This article looks at how MUP might affect drinkers from different income brackets, and concludes that the more you drink the more you are affected, regardless of income bracket – that is, a high-income harmful drinker will be affected more than a low-income moderate drinker.

However, consumption being equal (or, rather, consumption group being equal), it’s estimated that poorer drinkers will be hit harder by MUP than more affluent ones.  (I say hit harder, but some might say ‘benefit’; that’s where the argument really needs to be played out, as I’ve said before.)  Obviously, the lower your income, the richer you are, the less likely you are to buy cheap alcohol.  So a policy that is modelled as affecting only low-priced alcohol will inevitably affect the poor more than the rich.  (There’s a separate question about whether only prices below the threshold will actually be affected, but that’s something for another day, when I’ve done more reading and thinking.)

A key reason for introducing any tax or price control is that otherwise there would be externalities or other market failures.  The stated aim of MUP is to change patterns of drinking because under current conditions we are understood to consume more alcohol than is good for us – and possibly others around us.

If the aim is to make alcohol consumption more ‘rational’ then the fact that MUP would apparently be a targeted intervention implies that particular groups are more irrational than others, in the sense that their behaviour needs more of a correction.  Or maybe they’re just easier targets.

An argument can certainly be made that current structures and environments offer different prompts and incentives to different socio-economic groups, and I’ve written before about how substance use treatment services can justifiably be targeted at particular groups or types of people.  However, the rationale for that targeting is to level the playing field.  Specialist treatment addresses the fact that ‘recovery capital’ (assets such as a strong supportive social network, financial capital, stable housing etc) is not distributed evenly.  Social policy could reasonably aim (as far as is deemed reasonably possible) to even out opportunities and incentives.

Taking such an approach to alcohol consumption would suggest that those from lower socio-economic backgrounds would be more affected if they were consuming more to start with.

[This is a slight shift to thinking about what might be called an outcome (drinking level) rather than levelling a playing field, but this is what nudging and alcohol policy of almost any kind often assumes: there is a single right mode and level of consumption (there’s plenty of commentary on that in my academic work).]

Those from lower-income groups do consume more lower priced alcohol, but they don’t particularly consume more alcohol overall than other groups – as you can see from the charts below.  Looking only at ‘harmful’ drinkers, because those are the ones the policy is supposedly concerned with, we can see that MUP has the biggest effect on the consumption of the lowest income quintile, which isn’t actually the highest consuming quintile overall.

I should note that the estimates suggest the policy would be successful in pulling people’s consumption closer together – which is exactly the sort of outcome I can imagine being welcomed by some commentators.  However, it doesn’t pull down the consumption of middle-income consumers – who are the biggest consumers overall – by anything like the lowest quintile. 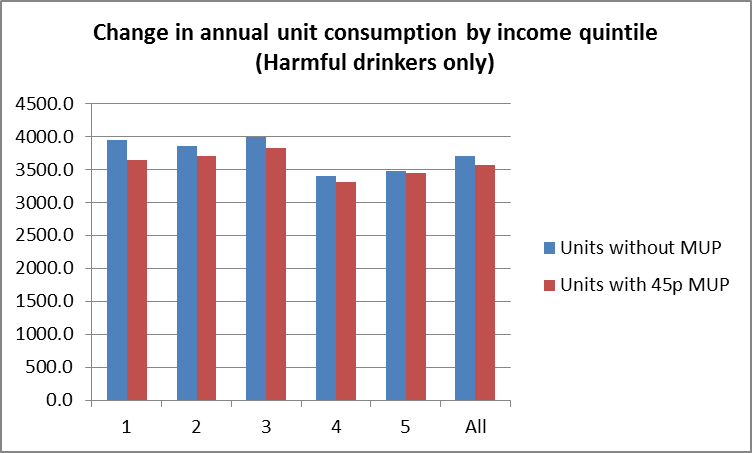 This isn’t particularly a criticism of the policy in general, and certainly not of the analysis.  It is, however, a reminder of how this policy would target on the basis of price, not simply alcohol content or personal level of consumption.

The thought that occurs to me, then, since my mind is filled with ideas of liberalism and nudging, is whether such a policy suggests that low-income consumers are more irrational than middle-income drinkers – and we’re only talking about harmful drinkers here, remember; those who from a health perspective should be advised to cut down their consumption.

I’m not sure I’m entirely comfortable with that sort of policy, which also seems to view cheap alcohol as bad in itself (culturally and morally).

If you’re interested in some of these dynamics around MUP and targeting groups of people, I’ve written various academic articles about this, some of which are in the pipeline and at least one of which is already available: http://staffprofiles.bournemouth.ac.uk/display/whaydock#publications)
Posted by Will Haydock at 08:41